From customer requirement to tailor-made coolers - perfect Fit for Freezers. Contractors can rely on the skilled assistance of Kelvion’s cooling experts starting right from the design phase. This is how cooling, fermenting, drying and freezing solutions are developed at moderate costs with maximum performance. The development of the cooler for a spiral freezer shows how the designers at Kelvion complement those of the contractor.

The tailor-made design of a heat exchanger demonstrates its effectiveness by the quantities it can cool efficiently. For example, in the form of more fresh frozen products. Spiral freezers in which deep-frozen products are placed before they are packaged and stored are a perfect example of this: When the conveyor speed and introduced capacity are optimally coordinated, more deep-frozen bread rolls, hamburger patties or even grill-ready chicken legs can leave the factory.

The design process takes place hand in hand with Kelvion
That’s why clients such as the contractor Lipsia Automation GmbH in Brandis, which specializes in conveyor systems and freezers, collaborates very closely with Kelvion when it comes to designing the refrigeration technology. “Our cooling experts work hand in hand with the designers at Kelvion,” reports Robert Engelhardt, who supports projects at Lipsia as a sales employee.

The first step is to learn about the requirements of the end user. This is because the quantity of goods to be frozen as well as their composition is what determines the design of the freezer. Are you dealing with heavy or light, large or small, round or flat products? “All this has an influence on how fast we can reach the target temperature. In other words, how much capacity we require,” says Engelhardt. However, it is also important to know how much moisture the products will introduce to the freezer because this determines the configuration of the cooler and the required defrost cycles. 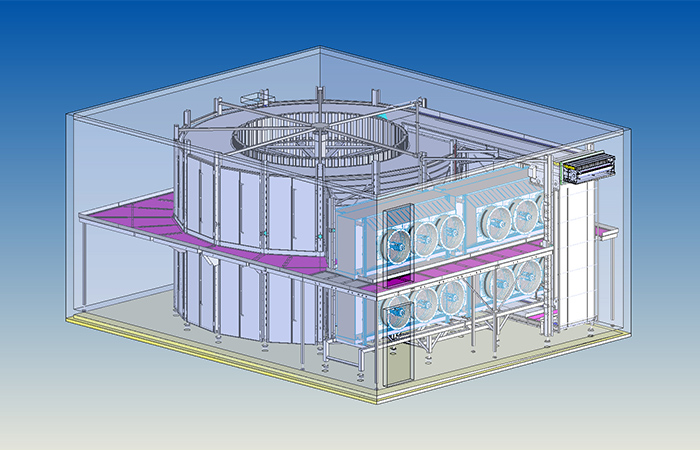 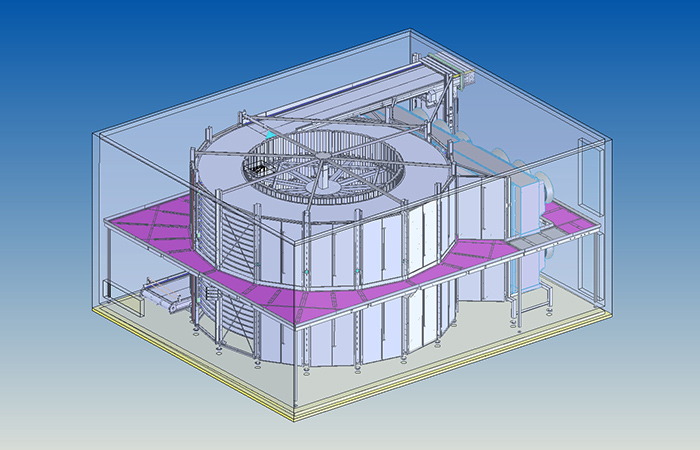 Initial layout based on important key data
Uwe Jäkel, who works at Kelvion as a master builder of refrigeration systems, first receives initial information such as the available space for the cooler, the refrigerant being used and the planned capacity, the air discharge temperature to be achieved as well as how much moisture the products will introduce. “Using this data, we then determine the number and layout of the unit coolers,” he says. The number of evaporators is always increased by one because before a heat exchanger ices up, it is defrosted with hot gas. This ensures efficient and energy-saving operation of the cooler because no costs for defrosting are incurred while using the hot gas from the compressors.  This process takes place for all evaporators in succession.

“During the defrost cycle, the fans behind the evaporator are shut off and the single dampers close automatically so that the evaporator is sealed off from the interior of the freezer,” reports Jäkel. “Then the cooler to be defrosted is blasted with hot gas until it is free of ice.” The integrated single dampers ensure that the heat input into the freezer cell is kept as low as possible. Therefore, the freezer does not have to be cooled down again after the defrosting process. In the meantime, the remaining evaporators are able to maintain the required cooling capacity – that’s why the n+1 principle applies to freezers.

Maximum output via several evaporator stages
Humidity is also relevant for the fin spacings. “Here it is important to find the ideal compromise between high capacity and cooler service life as well as a low tendency for icing,” says Jäkel, “because both targets are in conflict with each other.” If you favor high capacity, then small fin spacing would be good (e.g. seven millimeters), but this type of small fin spacing would quickly lead to freezing condensate causing a blockage. For this reason, coolers are built with several – usually three – fin spacings. The first stage in the air direction has a very large fin spacing, e.g. 28 millimeters, so that ice deposits on the fins several millimeters thick would still always allow enough air to pass through. When the air meets the second and third stage, it is already drier and the fin spacing can be smaller (e.g. 14 mm). Starting with the third stage, cooling specialists choose small spacings of just a few millimeters.

Utilizing experience from other projects
When designing coolers, Jäkel and his colleagues draw on decades of experience. They also make use of design software that was developed in-house by Kelvion. It contains all the knowledge from countless projects. “This enables us to make modifications very quickly, for example, when the customer wants to run meat products through a freezer system along with deep-frozen bakery goods,” says Jäkel.

Engelhardt and his colleagues at Lipsia appreciate this cooling expertise: “Because of early and close cooperation during the design phase, we are able to ensure the best possible synchronization between the freezer housing and its refrigeration components as well as obtain maximum performance from a given space.” But that’s not the only factor in favor of Kelvion as the evaporator supplier. He also has praise for their on-time delivery and after-sales service.

After-Sales service is a given
“Naturally as a contractor, we are the first contact for the food manufacturer when clarification is needed. But when setting up the system for a new type of product or when there are problems with the defrost cycles, we benefit from Kelvion’s expertise,” says Engelhardt, referring to a case in which the defrost cycles had to be improved due to an unplanned product. “The coolers became blocked too quickly. But with Kelvion’s help, we were able to quickly come up with the right defrost cycles and solve the problem for our customer.”

Modular solutions ensure heat exchangers are a perfect fit
The example shows that heat exchangers are often precision fit, individual products. In order to keep costs under control for a project-specific design, they are usually not “custom-made from the ground up” but rather “made-to-measure.” This means that adjustments are made on a modular basis so that expensive single-unit production can be avoided. To that end, Kelvion offers a broadly diversified range of heat exchangers in various designs and quality levels which can be adapted to the available space as well as integrated into existing systems, etc. in a cost-effective manner.