Heat exchangers put to the test with the new NX350M plate

Performance test on a large scale

Specifiers, plant engineers or operators all rely on correct calculations when dimensioning heat exchangers. These calculations must be based on practice-oriented characteristics, which is why Kelvion never leaves anything to chance. Every characteristic - whether for small or large heat exchangers - can be loaded. This is because the data is not simply generated in a computer, but validated in practical tests. 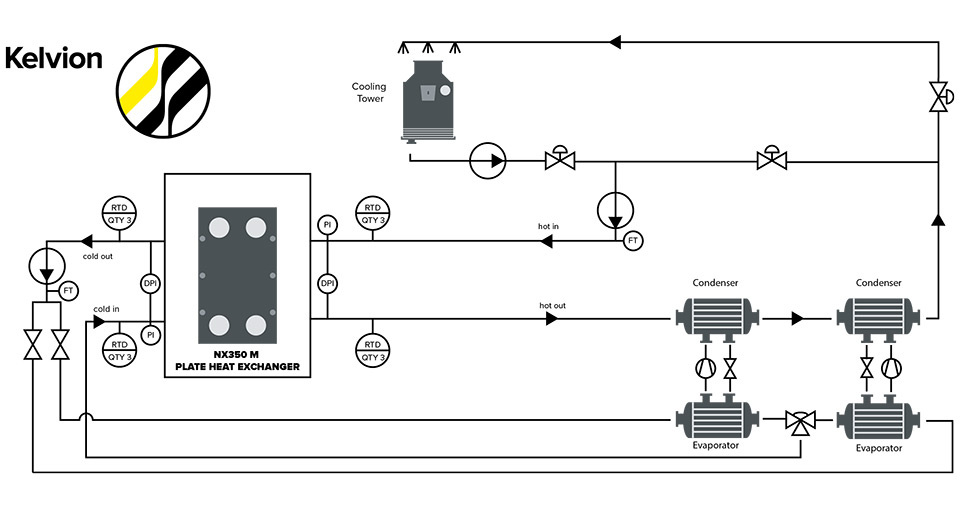 The tests are mainly carried out in the company's own pilot plant, a center with high-precision measuring technology, where practical conditions can be simulated exactly. The performance measurements performed there ensure reliable results. Usually testing just a few plates is enough to give a significant outcome - thanks to decades of experience, Kelvion engineers know how this can be extrapolated to high plate numbers. But, every so often, we carry out tests on a large scale in independent laboratories.

Such a full-scale power measurement was carried out in summer 2019, in order to put the capabilities of the new Kelvion plate NX350M to the test. The plate was developed for high heat transfer rates required for cooling, for example, in data centers, power plants, steel production and district heating and cooling networks.

Colossus on the test bench

The test unit for NX350M was a 20-ton colossus built by the Kelvion team in Catoosa (Oklahoma/USA). Measuring more than one meter wide, over three meters high and a whopping five meters long, it was assembled from more than 700 plates. The plate development and the prototype were created within a few months. They were built for a full-scale performance measurement with even stricter requirements than those of the frequently requested AHRI 400 standard, and under test conditions that correspond to a later typical application.

In addition to the measuring equipment specifications, the tests had to be performed in a climate-controlled environment at two different operating points for at least one hour each. Precision was a prerequisite because, in data center cooling, for instance, where performance is in the double-digit megawatt range, every bit of efficiency is important. Even one per mil less power would mean considerably higher air-conditioning costs and have a negative impact on the PUE value (Power Usage Effectiveness). This shows how much power must flow into the IT side and how much into the peripherals - especially ventilation and cooling - to operate a data center.

Confidence is good, but control is better

As such a test is not commonplace, colleagues from Europe and America came together to follow developments. They all trusted that the heat exchanger would meet the requirements. But they were keen to know: would the unit deliver what the design software promised, even under the required test conditions? Yes. The performance was confirmed 100% at both operating points.

The data are incorporated into our design software, particularly into characteristic curves for dimensioning units with the new NX350M plate. This gives specifiers and end customers certainty that they can calculate with reliable data and precisely calculate the performance of Kelvion heat exchangers in advance.