Historical city center of Düsseldorf. Rows of houses one after the other and pubs as far as the eye can see. The capital city of North Rhine-Westphalia is said to be the longest counter in the world. Right in the middle of things and directly on the banks of the Rhine: The Füchschen Brewery – a family-owned micro brewery serving beer and tradition.

Füchschen Alt beer, a regional specialty of the Füchschen family which, in addition to wheat beer, non-alcoholic Alt beer, organic rhubarb spritzer and lemonade, now even markets a Pils beer, has been brewed in the heart of the old city since 1848. This makes the family-run business the first brewery in Düsseldorf to brew the Germans' favorite bottom-fermented beer, with a 55% share of the market. Capacity has recently been increased following an extensive one-year expansion of the fermentation and storage cellars. Right next to the original Füchschen premises, an old underground car park was gutted and then equipped with the very latest brewing technology and corresponding cooling technology. Six Kelvion high-performance ceiling-mounted coolers supply the different cooling zones for the Alt bier and other varieties.

The refrigeration plant was designed and built by "Birgels Prima Kälte Klima GmbH & Co. KG" based in Meerbusch. Birgels supplies just about all the breweries in the old city center of Düsseldorf, which are all faced with the same challenge: The thirst for craft beer specialties is growing. Fermentation and storage capacities have been largely exhausted everywhere. There is no space left in the old city center for structural expansion. Over the last 22 years, the Füchschen Brewery has increased its output from 9,500 to 36,000 hectoliters. In turn the fermenting and storage capacities were exhausted. After all, beer needs to mature.

Peter König, CEO of the Füchschen Brewery, was fortunate that there was  a disused, former underground car park next door that had been converted into a bowling alley. – 400 square meters in the best location. Plenty of space to double capacity, but with severe height restrictions in terms of structural engineering. The advantage: The production process was not compromised by the construction and installation work on account of the old fermentation and storage cellars, including the existing technology, remaining unaffected and therefore continuing to be fully available. The disadvantage: The height restriction required a somewhat more creative solution regarding the installation of the new cooling technology. –The very area in which Birgels is the recognized specialist in the regional Düsseldorf brewery area. 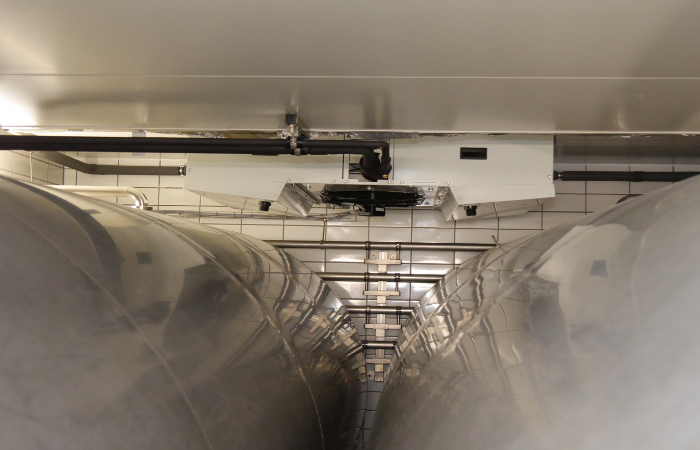 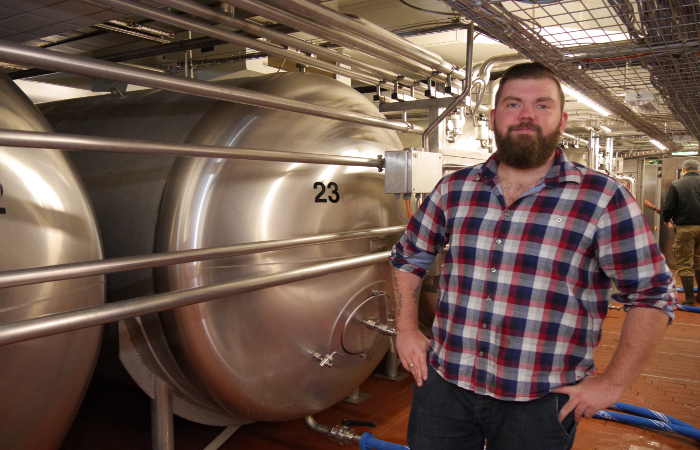 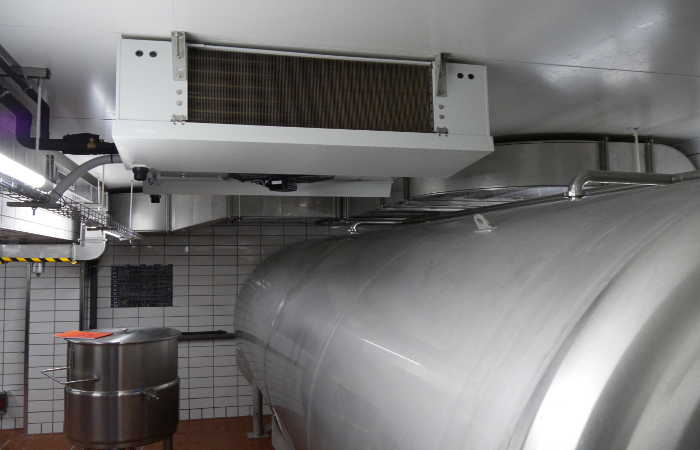 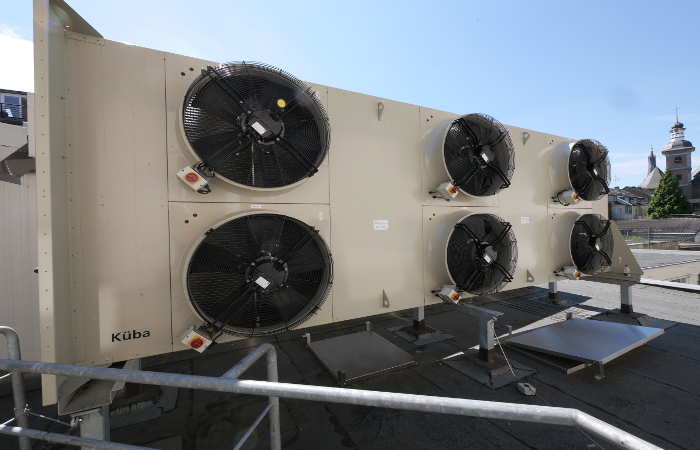 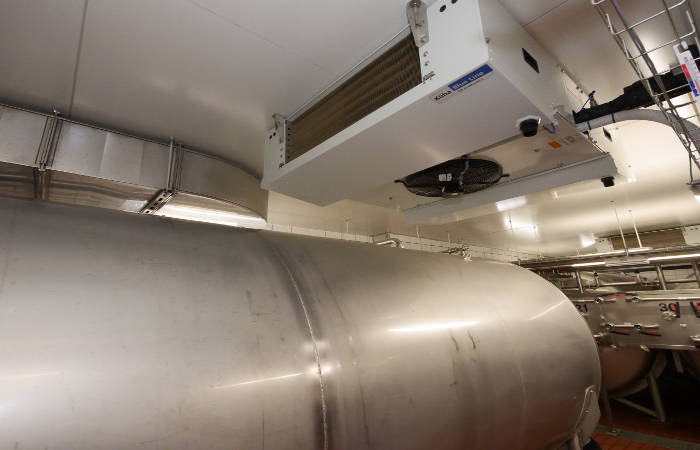 Due to lack of space, a Kelvion condenser was placed on a roof space and had to be lowered over the facade of the building on a Sunday using a crane. It is positioned outside. "This means it is subject to the noise emission limits set by the City of Düsseldorf at 28 decibels", comments refrigeration engineer Friedrich Birgels. The six quiet, speed-regulated EC fans remain below the limit even at full load. The three compact compressors of the centralized refrigeration system, operating with R134A, could still be accommodated in the machine room.

On account of the tanks in the storage cellar being dimensioned accordingly, there was no longer much room for the air coolers. In order to obtain the greatest possible storage capacity with the expansion, Birgels therefore installed DZAE45-F41 Kelvion space-saving high-performance ceiling-mounted coolers, which allow optimum utilization of space and blow evenly on both sides. This ensures that the air flow reaches the furthest corners of the cooling room, guaranteeing optimum cooling times, uniform climactic conditions in the room and even cooling of the products.

"I only install Kelvion air coolers of the Küba product brand. This is a genuine premium product of high quality that we have never had problems with. The price-performance ratio is also spot on“, says Birgels. The Füchschen master brewers are likewise convinced of the quality. "Kelvion air coolers have been cooling our fermentation and storage cellars reliably for decades, ensuring a constant ambient temperature. That is convincing", adds deputy master brewer Michael Ruf (29).

The evaporating temperature in the fermentation cellar is -10°C and -5°C in the storage cellar. Because of the difference in the evaporating temperature, two suction lines had to be installed. Once the beer in the eight fermentation tanks has matured, they are cooled with 0°C water to stop the fermentation process. To do this, water is pumped through spiral piping located in the tank, cooling the beer from 26°C to 11°C. The beer is then re-pumped into the eight tanks in the storage cellar and cooled to 2°C within seven days.

The six ceiling-mounted coolers installed in the storage cellar are equipped with the highest level of corrosion protection. The housings are sendzimir-galvanized with a powder coating on both sides; the end-plates are made of stainless steel. The fins are coated with epoxy resin. The refrigerant tubes and condensate drains of the air coolers are made of stainless steel. "With this we can prevent corrosion that might otherwise occur", explains Birgels.

Friedrich Birgels founded his company in 1997 and expanded quite rapidly. In 2001, Birgels already had 15 employees. Today, there are a good 45 specialist personnel working in the company. In addition to the company's headquarters in Meerbusch, the firm also has an operation in Düsseldorf and another one in Frankfurt. Birgels Prima Kälte Klima GmbH operates throughout Germany. Its customers include well-known system catering trade operations such as McDonald’s, Burger King, KFC, Pizza Hut, Gate Gourmet, LSG Sky, as well as the Düsseldorf brewery and the catering sector in general. 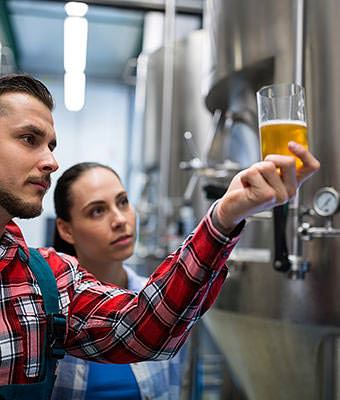 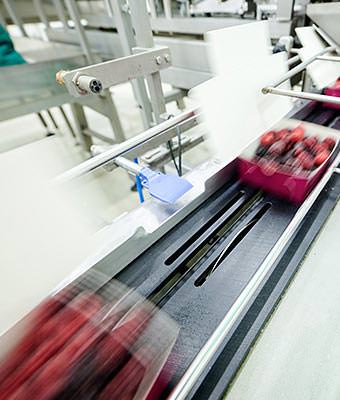 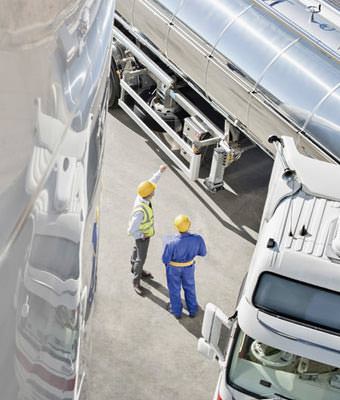